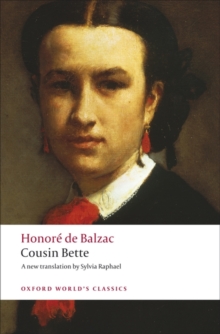 Cousin Bette (1846) is considered to be Balzac's last great novel, and a key work in his Human Comedy.

Set in the Paris of the 1830s and 1840s, it is a complex tale of the devastating effect of violent jealousy and sexual passion. Against a meticulously detailed backdrop of a post-Napoleonic France struggling with massive industrial and economic change, Balzac's characters span many classes of society, from impoverished workers and wealthy courtesans to successful businessmen and official dignitaries. The tragic outcome of the novel is relieved by occasional flashes of ironic comedy and the emergence of a younger generation which has come to terms with the new political and econimic climate. ABOUT THE SERIES: For over 100 years Oxford World's Classics has made available the widest range of literature from around the globe.