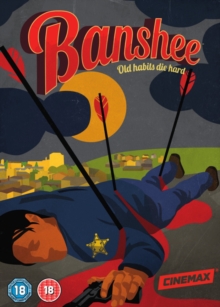 All ten episodes from the third season of the TV crime drama following an ex-con who assumes the identity of a sheriff in the fictional town of Banshee, Pennsylvania.

Having served 15 years in prison following a diamond heist, the unnamed man posing as Sheriff Lucas Hood (Antony Starr) and his crime partner and ex-girlfriend Carrie (Ivana Milicevic) risk having their dark pasts and real identities publicly exposed by the threat of old enemies.

In this series, with the death of Rabbit (Ben Cross) peace seems to have come to Banshee finally.

With the return of Nola (Odette Annable) and Chayton (Geno Segers) heading to rile up the Kinaho, the peace becomes increasingly precarious.

When a FBI agent turns up on Hood's doorstep his cover could be compromised.

The episodes are: 'The Fire Trials', 'Snakes and Whatnot', 'A Fixer of Sorts', 'Real Life Is the Nightmare', 'Tribal', 'We Were All Someone Else Yesterday', 'You Can't Hide from the Dead', 'All the Wisdom I Got Left', 'Even God Doesn't Know What to Make of You' and 'We All Pay Eventually'.