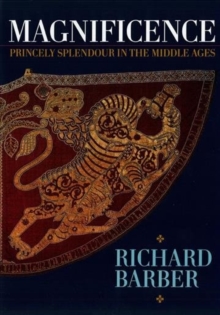 Magnificence - and Princely Splendour in the Middle Ages

"The book is stunning, in every respect, and will be the gold standard in its subject for years to come." ALISON WEIR "This is glorious!

It's a peach-and-peacock of a book, as befits its subject: scholarly, always accessible, with a wealth of fabulous illustrations, superbly designed." KEVIN CROSSLEY-HOLLAND How do you recognise a king when you see one?

By the thirteenth century, the special status, which had evolved over the centuries, was matched by the display of kingly grandeur.

This was enshrined in the idea of "magnificence". Magnificence was seen as the king's duty, was applied to everything: his person, the garments he wore, his courtiers, the artists, the musicians and architects he employed.

Above all, it was on show in his public appearances, his feasts and ceremonies.

The "magnificent" collections of jewels, manuscripts and holy relics were displayed to a handful of favoured visitors.

Those visitors also had to be entertained, and royal feasts developed into an amazing form of performance art. This book is not only about objects and occasions, but also about the people who created them, from the kings themselves and their court servants to the artists, craftsmen and musicians of all kinds, down to the scribes and clerks, the showmen, dancers and acrobats, and the servants at table. All this is explored in this wide-ranging survey, covering the whole of western Europe, but centring on France, the wealthiest of the kingdoms, members of whose extended royal family were at different times kings of Poland, Hungary, Naples, Jerusalem, England, and, most spectacularly, dukes of Burgundy. Pageantry and displays of splendour always catch our attention, and medieval feasts and tournaments are among the most popular forms of historical re-enactment today.

Magnificence celebrates many of the high points of the medieval world, drawing them together in a sumptuous volume. RICHARD BARBER has had a huge influence on the study of medieval history and literature, as both a writer and a publisher.

His first book on the Arthurian legend appeared in 1961, and his major works include The Knight and Chivalry (winner of the Somerset Maugham Award in 1971), Edward Prince of Wales and Aquitaine, The Penguin Guide to Medieval Europe and The Holy Grail: the History of a Legend which was widely praised and was translated into six languages.