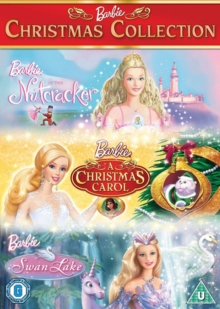 Double-bill of Barbie Christmas tales. In 'A Christmas Carol', it's Christmas Eve, and Barbie tells Kelly the story of a girl named Eden Starling, a glamorous singing diva who owns a theatre and doesn't believe in Christmas.

On Christmas Eve, she orders everyone who works for her to sing on Christmas Day, and is then visited by three spirits who try to change her perspective on Christmas forever.

In 'The Nutcracker', loosely adapted from E.T. A. Hoffmann's story 'The Nutcracker and the Mouse King', Barbie tells sister Kelly the story of Clara, who receives a nutcracker from her Aunt Drosselmeyer.

Awakening under the Christmas tree, Clara finds her nutcracker fighting the Mouse King and his mouse army, and, deciding to help, finds herself shrunk to their size.