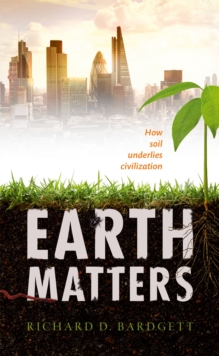 For much of history, soil has played a major, and often central, role in the lives of humans.

Entire societies have risen, and collapsed, through the management or mismanagement of soil; farmers and gardeners worldwide nurture their soil to provide their plants with water, nutrients, and protection from pests and diseases; major battles have been aborted or stalled by the condition of soil; murder trials have been solved with evidence from the soil; and, for most ofus, our ultimate fate is the soil.

In this book Richard Bardgett discusses soil and the many, and sometimes surprising, ways that humanity has depended on it throughout history, and still does today.

Analysing the role soil plays in our own lives, despite increasing urbanization, and in the biogeochemical cycles that allow the planet to function effectively, Bardgett considers how superior soil management could combat global issues such as climate change, food shortages, and the extinction of species.

Looking to the future,Bardgett argues that it is vital for the future of humanity for governments worldwide to halt soil degradation, and to put in place policies for the future sustainable management of soils.