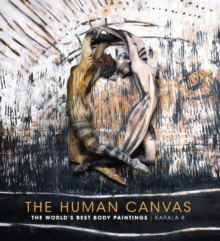 "The human body is the most beautiful thing to us, both inside and out." --Nick & Brian Wolfe Inside the Magical World of Bodypainting From fine art to fashion and from advertising to competition, the world of bodypainting is vast and beautiful.

With The Human Canvas you will get front row seats to the pageantry of mind-blowing images from accomplished artists around the world.

Many of these artists have won the coveted championship at the World Bodypainting Festival and every one holds a special place within this secret, joyful world of creativity and art.

With gorgeous images and inside peeks into the minds and processes of the artists, this book will inspire and amaze you. This book was inspired by the World Champion artists Brian Wolfe, who succumbed in his fight against pancreatic cancer in October 2013.

It has brought together a massive artistic community with years of history, creativity and experience. "Imagine a painter who can create an image from an idea in the fullness of color, design and expression, and then imagine this artist asking their canvas to sing, dance or scream." --Karala B.