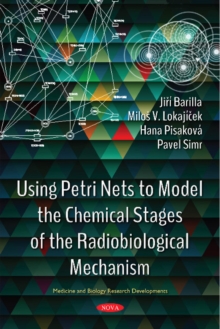 This book presents new developments in the study of the chemical stage of a radiobiological mechanism.

While for low-LET particles a pair of DSBs in the same sections of both the equal DNA molecules is to be formed by different particles in a relatively short irradiation interval, the increase of these DSB pairs at higher LET values is given by singular particles.

This means that the radiobiological mechanism in physical and biological stages may be understood at least in principle, while the chemical stage represents a still rather open problem.

It concerns basic process running in this stage as well as the influence of radiomodifying agents being present in a corresponding water medium during irradiation (mainly for low-LET radiation), which may be important in the regions of radiotherapy as well as radioprotection.

It has been commonly assumed that this stage has been mediated by radical clusters formed by a densely ionizing end of secondary electrons.

It is evident that only greater radical clusters (being able to form at least two SSBs in a given DNA molecule) may be efficient biologically.

These clusters may originate, however, at different distances from DNA molecules present in a cell; they may meet a certain time after (due to heat motion and cluster diffusion).

Consequently, the resulting biological effect may be influenced also by chemical processes running in diffusing clusters.

A new model of corresponding cluster evolution (based on the use of a continuous Petri net and describing the concurrent influence of cluster diffusion and corresponding chemical reactions) will be presented and the possibility of its use in the analysis of a biological stage will be shown.

The corresponding influence on the processes running in a biological stage may be estimated as well.