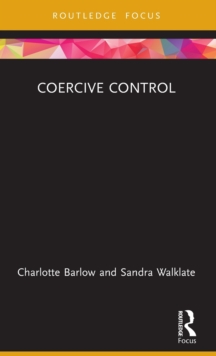 Part of the Criminology in Focus series

This book offers a critical appreciation of the nature and impact of coercive control in interpersonal relationships.

It examines what this concept means, who is impacted by the behaviours it captures, and how academics, policy-makers and policy advocates have responded to the increasing recognition of the deleterious effects that coercive control has on especially women's lives.

The books discussed the historical emergence of this concept, who its main proponents have been, and how its effects have been understood.

It considers the role of coercive control in making sense of women's pathway into crime as well as their experiences of it as victims.

Coercive control has been presented predominantly as a gendered process and consideration is given in this book to the efficacy of this assumption as well as the extent to which the concept makes sense for a wide constituency of marginalised women.

In recent years, much energy has been given to efforts to criminalise coercive control and the concerns that these efforts generate are discussed in detail, alongside what the limitations to such initiatives might be.

In conclusion the book situates the rising pre-occupation with coercive control within the broader concerns with policy transfer, ways of taking account of victim-survivor voices, alongside the importance of working towards more holistic policy responses to violence(s) against women. The book will be of particular interest to academics, policy-makers and practitioners working in criminal justice who wish to both understand the nature and extent of coercive control, as well the importance of appreciating the role of nuance in translating that understanding into practice.