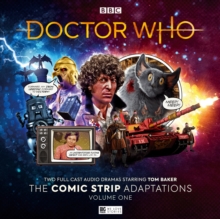 Part of the Doctor Who - The Comic Strip Adaptations series

Tom Baker plays the Fourth Doctor in two stories adapted from the fan favourite comic strip by Pat Mills and John Wagner. 1. Doctor Who and the Iron Legion adapted by Alan Barnes. 1979 AD! Led by the terrible General Ironicus, the mighty Iron Legion - robot veterans of the Eternal War - have come, seen and conquered the English village of Stockbridge!

Caught up in the mayhem, the Doctor pursues the Legion back through the great Dimension Duct to their place of origin - an alternative Earth where Rome never fell.

But can he survive the horrors of the gladiatorial Hyp-Arena long enough to uncover the terrifying secret at the heart of the Galactic Roman Empire? 2. Doctor Who and the Star Beast adapted by Alan Barnes1980 AD!

In Yorkshire, the authorities have dismissed reports that an Unidentified Flying Object was seen plummeting towards the ground... moments before the explosion that destroyed the Blackcastle Steel Mills.

After all, Blackcastle is the last place on Earth aliens would ever want to visit.

He's their alien. Their secret. And his name is... The Meep. He's not the only alien in Blackcastle, though. His pursuers, the terrible Wrarth Warriors, are on his trail, along with their unwitting accomplice: The Doctor.

Other parts played by members of the cast.