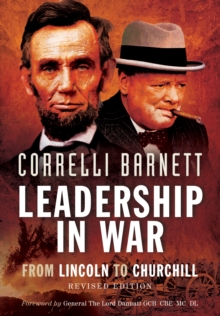 In this controversial study, Correlli Barnett examines the strengths and weaknesses of twenty wartime leaders in the nineteenth and early twentieth centuries.

He considers the extraordinary difficulties they faced, and analyses how they performed and what they achieved.

Were they successful, or were they beaten down by the burden of their roles?

His book focuses on men from very different backgrounds and from three continents in a range of modern conflicts from the American Civil War to the Second World War.

They range from statesmen like Lincoln, Lloyd George, Hitler and Churchill to generals like Grant, Haig, Rommel, Zhukov and Eisenhower, and admirals like Yamamoto and Ramsay.

These leaders demonstrated fascinating contrasts of personal character, styles of leadership and aptitude for command as they grappled with the daunting professional problems that confronted them.

In this challenging study, first published as The Lords of War, Correlli Barnett yet again demolishes hallowed reputations and rehabilitates the unjustly scapegoated.

His latest book confirms his reputation as a master of strategic history.