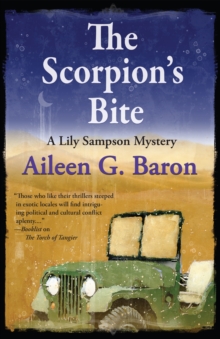 It is 1943 and the world is at war. Archaeologist Lily Sampson has been sent to Trans-Jordan by the OSS, along with Gideon Weil, the famous director of the American School of Archeology in Jerusalem.

As part of their survey, they roam the beautiful, silent desert where the indelible presence of Lawrence of Arabia still lingers, and where the ancient Nabateans once ruled an empire from their capital in Petra.

But soon Lily and Gideon are stranded in the Wadi Rum, and their Bedouin guide is murdered.

Could Gideon be guilty of the crime? Then the pair learn that two oil pipelines run from Iraq through the desert to ports on the Mediterranean: one through Trans-Jordan supplying the Allies, the other through Syria supplying the Nazis.

Syrians and Vichy French are raiding across the border, threatening to destroy the Trans-Jordan pipeline.

Lily and Gideon's real mission is to help safeguard the pipeline and to prevent oil from reaching the Nazis.

At the same time, Lily uncovers a Nazi plot to kidnap and kill the eight-year-old King Faisal of Iraq.

Can Lily and Gideon clear Gideon's name, protect the Trans-Jordan pipeline, sabotage the Syrian line, and rescue Faisal to prevent the Nazi takeover of Iraq?Aileen G.

Baron has a Ph.D. in archaeology and taught for 20 years at California State University, Fullerton.

Her first novel, A Fly Has a Hundred Eyes, won first place in the mystery category at both the Pikes Peak Writers conference and the SouthWest Writers Conference.

The Scorpion's Bite is her fourth novel and the third to feature archaeologist Lily Sampson. www.aileengbaron.com