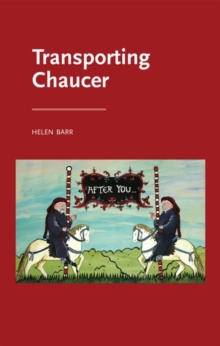 Drawing on the work of British sculptor Antony Gormley, alongside more traditional literary scholarship, this book argues for new relationships between Chaucer's poetry and works by others.

Chaucer's playfulness with textual history and chronology anticipates how his own work is figured in later - and earlier - texts.

Responding to this, the book presents innovative readings of the relationships between medieval texts and early modern drama, literary texts and material culture.

At the same time, it exposes how associations between architecture, pilgrim practice, manuscript illustration and the soundscapes of dramatic performance reposition how we read Chaucer's oeuvre and what gets made of it.

An invaluable resource for scholars and students of all levels with an interest in medieval English literary studies and early modern drama, Transporting Chaucer offers a new approach to how we encounter texts through time. -- .