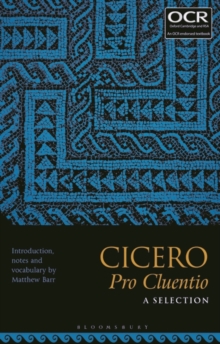 By: Barr, Matthew (Haberdashers' Aske's School for Girls, UK)(Edited by)

This is the OCR-endorsed publication from Bloomsbury for the Latin AS and A-Level (Group 1) prescription of Cicero's Pro Cluentio, sections 1-7 and 10-11, and the A-Level (Group 2) prescription of sections 27-32 and 35-37, giving full Latin text, commentary and vocabulary, with a detailed introduction that also covers the prescribed poems to be read in English for A Level. In 66 BC, Aulus Cluentius Habitus was tried for the attempted murder of Statius Albius Oppianicus the Elder.

The selections in this edition prove that Cicero was not above using character assassinations in his speeches, first attacking Oppianicus the Elder, then Sassia in a vivid, melodramatic narrative which distracts and diverts the jury from Cluentius' alleged crimes. Resources are available on the Companion Website.