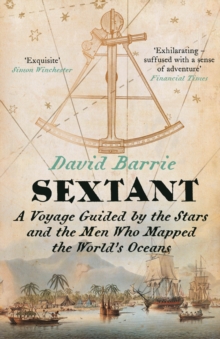 Sextant: a voyage guided by the stars and the men who mapped the world's oceans

With 2014 marking the tercentenary of the Longitude Act, this eloquent celebration of the sextant tells the story of this elegant instrument and explores its vital role in man's attempts to map the world.

This is the story of an instrument that changed the world. In prose as crisp as the book's subject, David Barrie tells how and why the sextant was invented; how offshore navigators depended on it for their lives in wild and dangerous seas until the advent of GPS - and the sextant's vital role in the history of exploration. Much of the book is set amidst the waves of the Pacific Ocean as explorers searched for the great southern ocean, charted the coasts of Australia, New Zealand, Canada, Alaska as well as the Pacific islands. Among the protagonists are Captain James Cook, the great French navigator, La Pérouse, who built on Cook's work in the exploring the Pacific during the 1780s, but never made it home, George Vancouver, Matthew Flinders - the first man to circumnavigate Australia, Robert FitzRoy of the Beagle, Joshua Slocum, the redoubtable old 'lunarian' and successful pilot of a small boat across the wild Southern Ocean and Frank Worsley of the Endurance.

Their stories are interwoven with the author's account of his own transatlantic passage aboard Saecwen in 1973, using the very same navigational tools as Captain Cook, and the book is infused with a sense of wonder and dramatic discovery.

A heady mix of adventure, science, mathematics and derring-do, 'Sextant' is a timeless tale of sea-faring and exploration. A love letter to the sea, it is narrative history for star gazers and sailors, for everyone with a love of salty breezes and a sense of adventure. Beautifully produced, 'Sextant' offers storytelling at its very best.