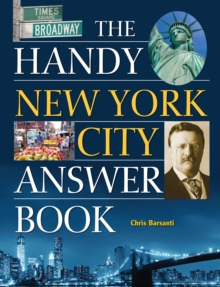 New York the self-proclaimed capital of the world, the largest city in the United States, and is known as a melting pot of immigrants, Ellis Island, the Statue of Liberty, the Empire State Building, Central Park, Wall Street, Broadway, bridges, bodegas, restaurants, museums and so much more.

The Handy New York City Answer Book explores the fascinating history, people, myths, culture, and trivia, taking an in-depth look at the city so nice, they named it twice.