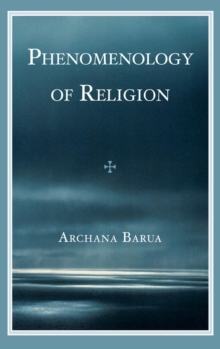 Phenomenology of Religion is designed to be a practical introduction to the discipline of acquiring an understanding of the art of communication, including religious communication, from a phenomenological perspective.

It is an exploration of the meaning of specific expressions of religious life in a manner that does them justice, a manner that is emphatically sensitive to the viewpoint of the participants as well as appropriately objective.

Out of the wide variety of themes covered by Husserl's phenomenology and later developed by Heidegger, Merleau Ponty, and others in different possible directions, the present work is an attempt at indicating the few features of the method which derives from Edmund Husserl's basic themes of the phenomenological movement and its methodology.

It is an attempt at exploring the manner in which this method has been applied to the study of art and religion by other phenomenologists and accordingly to state and introduce the problem of this profound bulk-namely, the phenomenological apporach to religion-mostly in their terms. The present work seeks to provide insights into J. N. Mohanty's vision of phenomenology and of Husserl's ideas in particular, and contains discussion of some of the central issues which form the foundation of Husserlian transcendental phenomenology.

Phenomenology of Religion will be of immense relevance to those who wish to pursue phenomenology from a cross-cultural perspective.