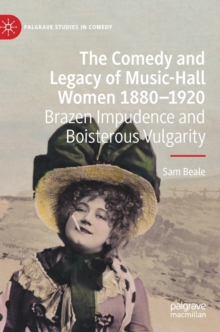 The Comedy and Legacy of Music-Hall Women 1880-1920 : Brazen Impudence and Boisterous Vulgarity

Part of the Palgrave Studies in Comedy series

This book explores the comedy and legacy of women working as performers on the music-hall stage from 1880-1920, and examines the significance of their previously overlooked contributions to British comic traditions.

Uniquely for women in the late-nineteenth and early-twentieth centuries, these pioneering performers had public voices.

The extent to which their comedy challenged Victorian and Edwardian perceptions of women is revealed through explorations of how they connected with popular audiences while also avoiding censorship.

Their use of techniques such as comic irony and stereotyping, self-deprecation, and comic innuendo are considered alongside the work of contemporary stand-up comedians and performance artists including Bridget Christie, Bryony Kimmings, Sara Pascoe, Shazia Mirza and Sarah Silverman.