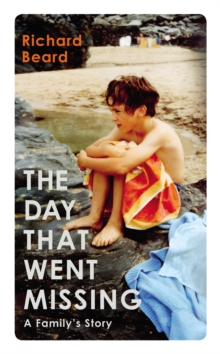 The day that went missing : a family's story

SHORTLISTED FOR THE RATHBONES FOLIO PRIZE 2018SHORTLISTED FOR THE JAMES TAIT BLACK PRIZE 2018A family story of exceptional power and universal relevance - about loss, about carrying on, and about recovering a brother's life and death. Life changes in an instant. On a family summer holiday in Cornwall in 1978, Nicholas and his brother Richard are jumping in the waves.

Suddenly, Nicholas is out of his depth. He isn't, and then he is. He drowns. Richard and his other brothers don't attend the funeral, and incredibly the family return immediately to the same cottage - to complete the holiday, to carry on.

They soon stop speaking of the catastrophe. Their epic act of collective denial writes Nicky out of the family memory. Nearly forty years later, Richard Beard is haunted by the missing grief of his childhood but doesn't know the date of the accident or the name of the beach.

So he sets out on a pain-staking investigation to rebuild Nicky's life, and ultimately to recreate the precise events on the day of the accident.

Who was Nicky? Why did the family react as they did? And what actually happened? The Day That Went Missing is a heart-rending story as intensely personal as any tragedy and as universal as loss.

It is about how we make sense of what is gone. Most of all, it is an unforgettable act of recovery for a brother.