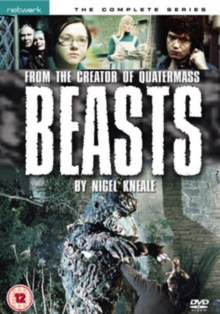 In 'Special Offer', Noreen (Pauline Quirk) is a clumsy shopgirl who becomes convinced that there is something sinister living behind the walls of the shop where she works.

When she is fired after the manager believes she is responsible for all the damages that have been taking place, Noreen returns to the shop looking for revenge...only to discover the real source of the disturbances.

In 'During Barty's Party', a couple are alone in an isolated cottage with only a radio for company, until a legion of intelligent rats start to invade their home.

In 'Buddyboy', Hubbard (Wolfe Morris) wants to sell his dolphinarium after his prize dolphin dies, and thinks he has found a buyer in Dave (Martin Shaw).

But what is the real reason behind Hubbard's eagerness to sell?

In 'Baby', a young couple expecting their first child move into a converted farmhouse, where they discover an urn hidden in a wall cavity that contains the body of a strange mutant creature.

Before long, they become convinced something is lurking in the woods outside, and the wife is woken by the sound of a baby crying.

In 'What Big Eyes', a man experiments with a theory that he believes explains an evolutionary link between man and wolf.

Finally, in 'The Dummy', a horror film actor famous for playing a monstrous character known as 'The Dummy' is about to play the role for the seventh time.

But this time, something seems different about him, and who exactly is killing off members of the crew?