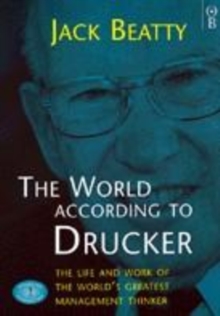 The world according to Drucker : the life and work of the world's greatest management thinker

Born in Austria in 1909, Drucker was raised in Vienna between the wars.

Emigrated to America in 1937, beginning a brilliant career in management. 1942, he became a Professor of Philosophy amd politics at Bennington college and later Professor of Management at New York University. He had an uncanny ability to spot trends, years ahead of other thinkers who have since picked them up and made them the height of managerial fashion.

Now 87, Drucker is the Professor of Social Sciences at Claremont Graduate School in California, and continues to teach and write with enthusiasm. An objective and at times critical assessment of his ideas and views, many of which were a head of their time, others simply radical.