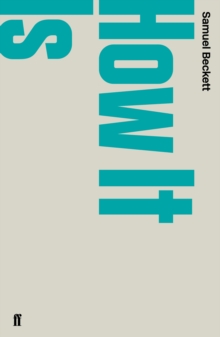 Published in French in 1961, and in English in 1964, How It Is is a novel in three parts, written in short paragraphs, which tell (abruptly, cajolingly, bleakly) of a narrator lying in the dark, in the mud, repeating his life as he hears it uttered - or remembered - by another voice.

Told from within, from the dark, the story is tirelessly and intimately explicit about the feelings that pervade his world, but fragmentary and vague about all else therein or beyond. Together with Molloy, How It Is counts for many readers as Beckett's greatest accomplishment in the novel form.

It is also his most challenging narrative, both stylistically and for the pessimism of its vision, which continues the themes of reduced circumstance, of another life before the present, and the self-appraising search for an essential self, which were inaugurated in the great prose narratives of his earlier trilogy. she sits aloof ten yards fifteen yards she looks up looks at me says at last to herself all is well he is working my head where is my head it rests on the table my hand trembles on the table she sees I am not sleeping the wind blows tempestuous the little clouds drive before it the table glides from light to darkness darkness to lightEdited by Edouard Magessa O'Reilly