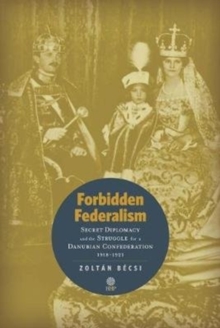 Forbidden Federalism : Secret Diplomacy and the Struggle for a Danubian Confederation, 19181921

The key concept of his title is that of federalism, understood as a unifying factor for the peoples of the former Austro-Hungarian Empire.

During the First World War, even those resolutely in favor of dismantling Austria-Hungary recognized that the Danubian area required some sort of federal unity, if only for economic reasons.

One of the main actors of the narrative is Karl of Habsburg-Lorraine, the last Emperor-King of Austria-Hungary.

As soon as Austria-Hungary fell apart, Karl started actively to try to reconstruct his empire by writing a plan for a new con/federal monarchy and by contacting the pope and the leaders of the Entente regarding this plan.

Becsi's book is a study in virtual history, what might have been, and reading it one is tempted to follow this line of thought as well.

The shadowy figures that cross its pages--the Marquis de Castellone who sought to win over the Foreign Office to Karl's plans, the better-known Stepan Radic who played with federal schemes in an effort to advance the Croatian cause, or the obscure swindler Karol Bulissa--all failed in their attempts.

The present configuration in Central Europe, with the emergence of the Visegrad bloc and disintegration in the Balkans, seems to make Zoltan Becsi's work more relevant than ever.