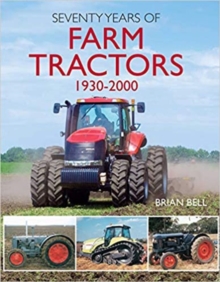 By the end of the twentieth century there were some half-million tractors on British farms - more machines than people to drive them.

Brian Bell's encyclopaedic book traces the evolution of the farm tractor from the days of starting handle and pan seat to current 4-wheel drive machines with air-conditioned cabs and computer management systems.

He deals in particular with developments of the classic period from the 1950s to the 1990s.

The book is arranged alphabetically by manufacturer from Allis-Chalmers to Zetor, one hundred marques in total.

These are all machines to be found on British farms irrespective of their country of manufacture.

Brian runs concisely through the histories of the companies and their major models, illustrated with a wealth of photographs and extracts from sales literature.

He adds some special features on items such as hydraulic systems and cold-starting aids.

He includes a glossary and full index. This book replaces the author's earlier, successful, Fifty Years of Farm Tractors.

Many of the photographs are new and the text has been brought up to date to include developments of the early twenty-first century.