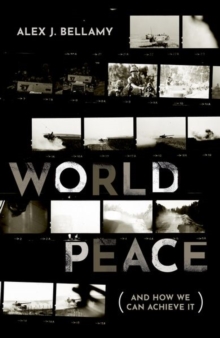 World peace : (and how we can achieve it)

For as long as there has been war, there have been demands for its elimination.

The quest for world peace has excited and eluded political leaders, philosophers, religious elders, activists, and artists for millennia.

World Peace aims to change all that and show that world peace is possible. Because the motives, rationales, and impulses that give rise to war - the quest for survival, enrichment, solidarity, and glory - are now better satisfied through peaceful means, war is an increasingly anachronistic practice, more likely to impoverish and harm us humans than satisfy and protect us.

This book shows that we already have many of the institutions and practices needed to make peace possible and setsout an agenda for building world peace.

In the immediate term, it shows how steps to strengthen compliance with international law, improve collective action such as international peacekeeping and peacebuilding, better regulate the flow of arms, and hold individuals legally accountable for acts of aggressionor atrocity crimes can make our world more peaceful.

It also shows how in the long term, building strong and legitimate states that protect the rights and secure the livelihoods of their people, gender equal societies, and protecting the right of individuals to opt-out of wars has the potential to establish and sustain world peace.

But it will only happen, if individuals organize to make it happen.