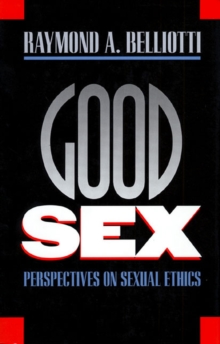 By: Belliotti, Raymond A.

Rules about sexuality, written and unwritten, have existed in every culture as have disagreements over what is and isn't acceptable.

Must morally permissible sex have only one function?

Must it be heterosexual? Must it occur within the confines of the institution of marriage?

Must it be accompanied by requisite emotions such as love and intimacy?

Addressing questions of sexuality that philosophers have pondered for centuries, Raymond Belliotti covers a myriad of issues, including the origin of gender and reproductive roles, the function of morally permissible sex, heterosexuality and homosexuality, mutual consent and extramarital sex.

Looking at sexual morality in both a historical and a contemporary context, he provides a critical survey of various philosophies, from ancient Greek dualism to feminism, and distinguishes morally permissable sex from morally ideal sex, maximally fulfilling sex, and prudentially sound sex.

In addition, Belliotti advances and defends a new and provocative five-tier framework for sexual ethics.

This framework requires examination of the presence of libertarian agreement; a contextual attentiveness to general moral precepts; an analysis of economic and sexual exploitation; consideration of third party effects; and an understanding of the effects of sexual activity on wider social contexts.

In addition, he develops a new theory of sexual ethics that aspires to mediate the tensions between mainstream Western moralities and their leftist and feminist critics.

Sexual activity is unquestionably one of most powerfully animating human drives.