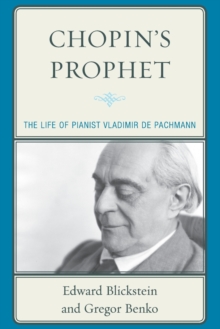 Widely regarded as the greatest player of Chopin's works, Pachmann embedded comedic elements-be it fiddling with his piano bench or flirting with the audience-within his classic piano recitals to alleviate his own anxiety over performing.

But this wunderkind, whose admirers included Franz Liszt and music critic James Gibbons Huneker (who cheekily nicknamed Pachmann the "Chopinzee"), would by the turn of the century find his antics on the concert stage scorned by critics and out of fashion with listeners, burying his pianistic legacy. In Chopin's Prophet: The Life of Pianist Vladimir de Pachmann, the first biography ever of this remarkable figure, Edward Blickstein and Gregor Benko explore the private and public lives of this master pianist, surveying his achievements within the context of contemporary critical opinion and preserving his legacy as one of the last great Romantic pianists of his time.

Chopin's Prophet paints a colorful portrait of classical piano performance and celebrity at the turn of the 20th century while also documenting Pachmann's attraction to men, which ultimately ended his marriage but was overlooked by his audiences.

As the authors illustrate, Pachmann lived in a radically different world of music making, one in which eccentric personality and behavior fit into a much more flexible, and sometimes mysterious, musical community, one where standards were set not by certified experts with degrees but by the musicians themselves.

Detailing the evolution of concert piano playing style from the era of Chopin until World War I, Chopin's Prophet tells the fantastic and true story of an artist of and after his time.