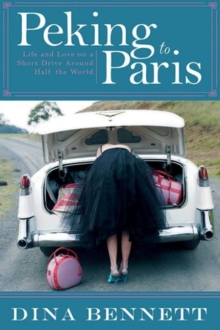 Peking to Paris : Life and Love on a Short Drive Around Half the World

In this thrilling journey from "Peking to Paris," a woman tries to save her car, her marriage, and her confidence from breaking down. In May 2007, leaving China's Great Wall is Car 84, one of 125 antique autos racing in the Peking to Paris Motor Challenge.

The 1940 LaSalle is guided by Dina Bennett, the world's least likely navigator: a daydreamer prone to carsickness and riddled with self-doubt.

She's married to the driver, a thrill-seeking perfectionist who is half-human, half-racecar.

What could go wrong?Funny, self-deprecating, and marred by only a few acts of great fortitude, Peking to Paris is first and foremost a voyage of renewal.

As Dina and her husband, Bernard, nurse their car across the Gobi, Siberia, and the Baltic states and south to Paris, she wrestles with nuts and bolts, along with the absurd hope that she can turn herself into a person of courage and patience. Writing for every woman who's ever doubted herself and any man who's wondered what the woman traveling with him is thinking, Dina brings you with her as she ducks rock-throwing Mongolians and locks horns with Russians left over from the Intourist era, endures a sandstorm facial, and is reduced to tears of joy over a bottle of red nail polish.

It's a rollicking ride, one that shifts the line between possible and impossible, and gives new meaning to the phrase "off the beaten tourist path."