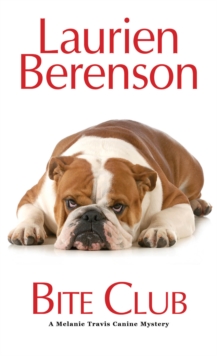 Kensington Publishing
1496718399 / 9781496718396
Paperback / softback
813.54
26/05/2020
Published 26/05/2020
United States
105 x 171 mm 304 pages
General (US: Trade)  Learn More
Thanks to Aunt Peg and her enthusiastic dog show pals, Melanie's aptly named Bite Club reading group has book lovers all over town burying their noses in thrilling murder mysteries. But another pet project surfaces when Melanie reluctantly agrees to train a Bulldog puppy for elusive member Evan Major. Between the unusual bruise on his face and a bizarre run-in with an unknown dog show attendee, introverted Evan's penchant for trouble sends him to an early gravewhile landing Melanie in the hot seat for homicide . . .

To prove her innocence, Melanie digs into the victim's shady past and uncovers a juicy scandal that cost Evan his marriage and, possibly, his life. Melanie realizes that booking the real culprit will require gathering her suspects together at the next Bite Club meeting. What she doesn't know is Aunt Peg has been hiding some explosive secrets of her ownsecrets that, once unleashed, could pit Melanie against an unpredictable killer bent on bringing this story to an abrupt end . . .