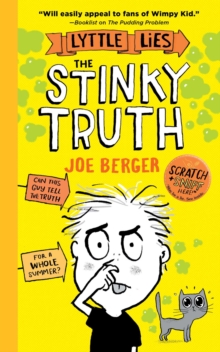 Part of the Lyttle Lies series

School's out, and a long, hot summer of endless fun beckons for Sam and Charlie. Except that no sooner has it begun than they're wishing it away in anticipation of Cry Wolfe, the first Wolfe Stone movie, which opens at the end of the season. Sam's mom issues him a challenge: if, and only if, Sam can make it through the entire vacation without telling a single fib, he will be allowed to see his crime-fighting hero on the big screen.

Six whole weeks, without a single lie?! No problem. Until the small matter of a tray of snowball cakes in the fridge with a Sam-sized footprint in them threatens to end Sam's dreams of cinema heaven. Can he continue to steer clear of lying, while not having to reveal the actual reason he was in the fridge, in the dark, standing on a table to get to the top shelf to hide ';the thing that shall never be named?'