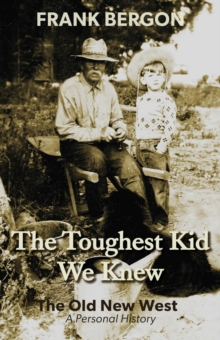 The Toughest Kid We Knew : The Old New West: A Personal History

This intimate companion to Two-Buck Chuck & The Marlboro Man brings us back to an Old West at odds with New West realities where rapid change is a common trait and memories are of rural beauty.

Despite the physical transformations wrought by technology and modernity in the twenty-first century, elements of an older way of thinking still remain, and Bergon traces its presence using experiences from his own family and friends. Communal camaraderie, love of the land and its food, and joy in hard work done well describe Western lives ignored or misrepresented in most histories of California and the West.

Yet nostalgia does not drive Frank Bergon's intellectual return to that world.

Also prevalent was a culture of fighting, ignorance about alcoholic addiction, brutalizing labor, and a feudal mentality that created a pain better lost and bid good riddance. Through it all, what emerges from his portraits and essays is a revelation of small-town and ranch life in the rural West.

A place where the American way of extirpating the past and violently altering the land is accelerated.

What Bergon has written is a portrayal of a past and people shaping the country he called home.