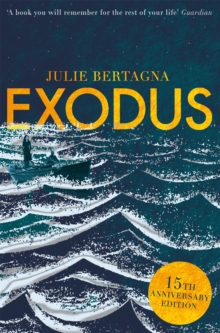 The fifteenth anniversary edition of Exodus, a startling, thrilling novel set in a dystopian future ravaged by global warmingIt is 2099 - and the world is gradually drowning, as mighty Arctic ice floes melt, the seas rise and land disappears forever beneath storm-tossed waves.

For fifteen-year-old Mara, her family and community, huddled on the fast-disappearing island of Wing, the new century brings flight.

Packed into tiny boats, a terrifying journey begins to a bizarre city that rises into the sky, built on the drowned remains of the ancient city of Glasgow.

But even here there is no safety and, shut out of the city, Mara realizes they are asylum-seekers in a world torn between high-tech wizardry and the most primitive injustice.

To save her people, Mara must not only find a way into the city, but also search for a new land and a new home . . . This new edition celebrates the 15th Anniversary of Exodus featuring a new foreword from the author.