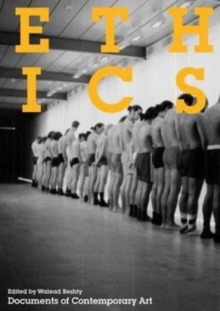 Part of the acclaimed 'Documents of Contemporary Art' series of anthologies . ...this volume persuasively argues that there can be an aesthetics to ethics. - Stan Douglas, Artist The boundary of a contemporary art object or project is no longer thought of solely in physical terms but rather in relation to the specific social field it creates.

Art is thus increasingly implicated in questions of ethics.

This collection evaluates the relation of ethics to aesthetics, an encounter central to the contested space of much recent practice.