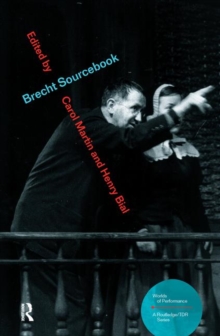 Part of the Worlds of performance series

Bertolt Brecht is one of the most prolific and influential writer-directors of the twentieth century.

This fascinating anthology brings together in one volume many of the most important articles written about Brecht between 1957 and 1997.

The collection explores a wide range of viewpoints about Brecht's theatre theories and practice, as well as including three plays not otherwise available in English: The Beggar or The Dead Dog, Baden Lehrstuck and The Seven Deadly Sins of the Lower Middle Class. Editors Martin and Bial have brought together a unique compendium which covers all the key areas including: * the development of Brecht's aesthetic theories * the relationship of Epic theatre to orthodox dramatic theatre * Brecht's collaboration with Kurt Weill, Paul Dessau and Max Frisch * Brecht's influence on a variety of cultures and contexts including England, Italy , Moscow and Japan. Together these essays are an ideal companion to Brecht's plays, and provide an invaluable reconsideration of Brecht's work.