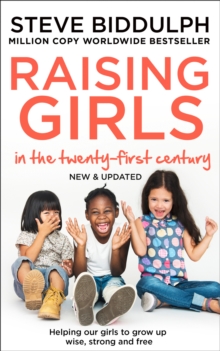 Raising girls in the 21st century : helping our girls to grow up wise, strong and free

The first book in a generation to look at boys' specific needs, parents loved its clarity and warm insights into their sons' inner world.

But today, things have changed. It's girls that are in trouble. There has been a sudden and universal deterioration in girls' mental health, starting in primary school and devastating the teen years. Raising Girls in the 21st Century is both a guidebook and a call-to-arms for parents.

The five key stages of girlhood are laid out so that you know exactly what matters at which age, and how to build strength and connectedness into your daughter from infancy onwards. Raising Girls in the 21st Century is both fierce and tender in its mission to help girls more at every age.

It's a book for parents who love their daughters deeply, whether they are newborns, teenagers, young women - or anywhere in between. Feeling secure, becoming an explorer, getting along with others, finding her soul, and becoming a woman - at last, there is a clear map of girls' minds that accepts no limitations, narrow roles or selling-out of your daughter's potential or uniqueness. All the hazards are signposted - bullying, eating disorders, body image and depression, social media harms and helps - as are concrete and simple measures for both mums and dads to help prevent their daughters from becoming victims.

Parenthood is restored to an exciting journey, not one worry after another, as it's so often portrayed. Steve talks to the world's leading voices on girls' needs and makes their ideas clear and simple, adding his own humour and experience through stories that you will never forget.

Even the illustrations, by Kimio Kubo, provide unique and moving glimpses into the inner lives of girls. Along with his fellow psychologists worldwide, Steve is angry at the exploitation and harm being done to girls today.

Your heart, head and hands will be strengthened by its message.