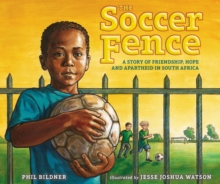 The Soccer Fence : A story of friendship, hope, and apartheid in South Africa

As a boy, Hector loved playing soccer in his small Johannesburg township. He dreamed of playing on a real pitch with the boys from another part of the city, but apartheid made that impossible. Then, in 1990, Nelson Mandela was released from prison, and apartheid began to crumble. The march toward freedom in South Africa was a slow one, but when the beloved Bafana Bafana national soccer team won the African Cup of Nations, Hector realized that dreams once impossible could now come true.

This poignant story of friendship artfully depicts a brief but critical moment in South Africas history and the unique role that sports can play in bringing people together.