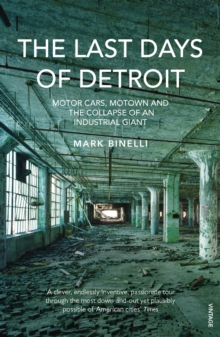 The last days of Detroit

Once America's capitalist dream town, the Silicon Valley of the Jazz Age, Detroit became the country's greatest urban failure, having fallen the longest and the furthest.

The city of Henry Ford, modernity, and Motown found itself blighted by riots, arson, unemployment, crime and corruption.

But what happens to a once-great place after it has been used up and discarded?

Who stays there to try to make things work again? And what sorts of newcomers are drawn there? Mark Binelli returned to his native Detroit to explore the city's swathes of abandoned buildings, miles of urban prairie, and streets filled with wild dogs, to tell the story of the new society emerging from the debris.

Here he chronicles Detroit with its urban farms and vibrant arts scene, Detroit as a laboratory for the post-industrial, post-recession world, Detroit reimagined as a city for a new century.