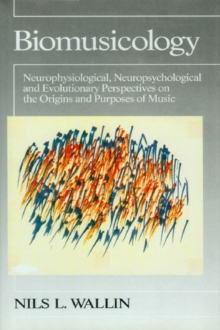 Biomusicology - Neurophysiological, Neuropsychological and Evolutionary Perspectives on the Origins and Purposes of Music

Since the 1960s, Swedish musicologist Nils Wallin has been exploring man's biological inheritance and its relationship to music.

This book, the culmination of these many years of investigation, offers a musicological interpretation of recent r esearch in neurophysiology and paleobiology.

A model of music as a natural system which serves as a foundation for the understanding of our musical mind, its capacity, and its phylogenetic roots is proposed. And a unified bio-socio-cultural field theory of music is presented.

It is here argued that music creates structures which develop and grow in a manner not unlike the processes controlling the growth of organisms.

Thus, music as a system is conditioned by biological microsystems, as well as superi or macrosystems of a more complex nature, such as the flow of consciousness and social, political, and economic systems-a natural synergetic system. Wallin's discourse encompasses-1) the musical consequences of cerebral functional asymmetry; 2) the h ierarchic and selective organization ofperceptual-cognitive auditory processes; 3) reticular-limbic responses to musical stimuli interpreted as synapse-modifying mechanisms for long-term motivation and learning, as well as for phylogentical learning; 4 ) the question of remnants or retentions with roots in the sound-gestures of other vertebrates of a higher order (and not solely the non-human primates) being active in the innermost structure of music; 5) vocalization techniques, e.g., the koelni ng technique of the late Paleolithic herding culture of Europe, as paleobiological retention; 6) the epistemological perspective of models of life-processes as discussed in recent scientific research. The paperback edition of 2008 reproduces the work first published in 1992.