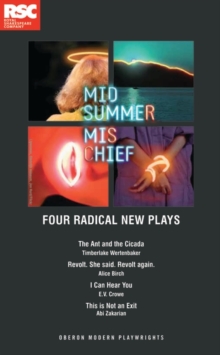 A volume of four new plays as part of the RSC's Midsummer Mischief by Alice Birch, E.

V. Crowe, Timberlake Wertenbaker and Abi Zakarian. The writers had the famous quote by Laurel Thatcher Ulrich, "Well-behaved women seldom make history" as an initial provocation and each writer has responded to this line in a unique and distinctive way. Contents:The Ant and the Cicada by Timberlake WertenbakerA mysterious investor has set his sights on a prime piece of Greek real estate.

Owned by two sisters whose lives and beliefs are at odds, and with debts rising all the time, the property's future is uncertain.

In a Greek tragedy, everybody loses. Through the struggle between two very different sisters for control of their family home, Timberlake Wertenbaker's new play explores why we are willing to let the home of art and democracy crumble as the rest of Europe looks on. Revolt. She said. Revolt again. by Alice BirchYou are expected to behave... Use the right words Act appropriately Don't break the rules Just behave This play is not well behavedAlice Birch examines the language, behaviour and forces that shape women in the 21st century and asks what's stopping us from doing something truly radical to change them. Winner of the George Devine Award for Most Promising New Playwright 2014I can hear you by E.V.

CroweTommy is dead. It's always tragic when they die young. People have posted loads of nice stuff on his Facebook page.

His sister Ruth has returned for the funeral and wants to get it just right.

Proper cutlery and a good spread. The send-off he deserved, and certainly better than they managed when mum died. The following Sunday Ruth's plans to leave again are interrupted as the doorbell rings and in walks a still very much dead, Tommy. E.V. Crowe's naturalistic supernatural play examines what the possibilities are for the women in Tommy's family, and questions if it's as easy for everyone to reveal what it is they want. This is not an exit by Abi ZakarianYou wake up, tied to a radiator.

Your hands are bound and there is a bag over your head. You know you should fight, but you don't know how or against whom.

But you can't have it all: where would you put it?Abi Zakarian's new play is a funny and ferocious drama about the absurdity at the heart of modern womanhood, and what really stands in the way of fulfilment.