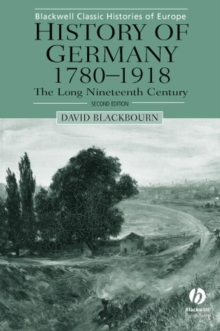 Part of the Blackwell classic histories of Europe series

In the late eighteenth century, German-speaking Europe was a patchwork of principalities.

Yet by the early twentieth century, unified Germany had become the most powerful state in Europe.

David Blackbourn tells the story of this transformation with eloquence, authority and wit, weaving together political, social, and cultural history.

This is a book about revolution, nationalism and the growing role of the state.

It also explores subjects that range from religion to racism, and Mozart to medicine.

The result is a powerful and original account of Germany from the eve of the French Revolution to the end of World War One.

This highly praised book is now available in a new edition with an updated bibliography.