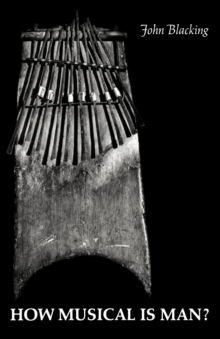 How Musical Is Man?

This important study in ethnomusicology is an attempt by the author -- a musician who has become a social anthropologist -- to compare his experiences of music-making in different cultures.

He is here presenting new information resulting from his research into African music, especially among the Venda.

Venda music, he discovered is in its way no less complex in structure than European music.

Literacy and the invention of nation may generate extended musical structures, but they express differences of degree, and not the difference in kind that is implied by the distinction between `art' and `folk' music.

Many, if not all, of music's essential processes may be found in the constitution of the human body and in patterns of interaction of human bodies in society.

Thus all music is structurally, as well as functionally, `folk' music in the sense that music cannot be transmitted of have meaning without associations between people.If John Blacking's guess about the biological and social origins of music is correct, or even only partly correct, it would generate new ideas about the nature of musicality, the role of music in education and its general role in societies which (like the Venda in the context of their traditional economy) will have more leisure time as automation increases.