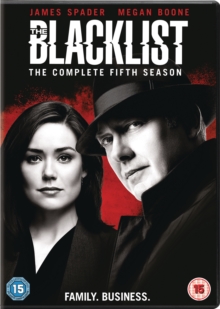 The Blacklist: The Complete Fifth Season

All 22 episodes from the fifth season of the American crime thriller starring James Spader and Megan Boone.

As Red reveals to Cooper that he has access to other wanted fugitives and can help the FBI to track them down, Cooper's intrigue gets the better of him and he allows Red into the bureau.

In this season, Red attempts to pick up the pieces of his ruined empire with a new case surrounding blacklister Smokey Putnum (Michael Aronov), the romance between Aram (Amir Arison) and Samar (Mozhan Marnò) heats up and Cooper asks Red for his help on a personal mission.