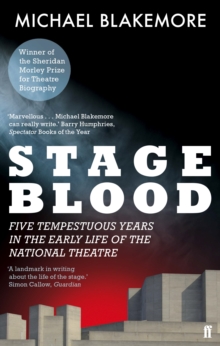 Stage blood : five tempestuous years in the early life of the National Theatre

In 1971, Michael Blakemore joined the National Theatre as Associate Director under Laurence Olivier.

The National, still based at the Old Vic, was at a moment of transition awaiting the move to its vast new home on the South Bank.

Relying on generous subsidy, it would need an extensive network of supporters in high places.

Olivier, a scrupulous and brilliant autocrat from a previous generation, was not the man to deal with these political ramifications.

His tenure began to unravel and, behind his back, Peter Hall was appointed to replace him in 1973.

As in other aspects of British life, the ethos of public service, which Olivier espoused, was in retreat.

Having staged eight productions for the National, Blakemore found himself increasingly uncomfortable under Hall's regime.

Stage Blood is the candid and at times painfully funny story of the events that led to his dramatic exit in 1976.

He recalls the theatrical triumphs and flops, his volatile relationship with Olivier including directing him in Long Day's Journey into Night, the extravagant dinners in Hall's Barbican flat with Harold Pinter, Jonathan Miller and the other associates, the opening of the new building, and Blakemore's brave and misrepresented decision to speak out.

He would not return to the National for fifteen years.