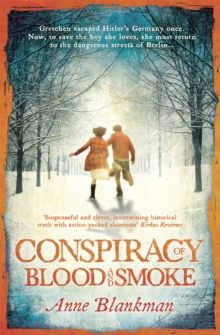 Conspiracy of blood and smoke

The gripping sequel to Prisoner of Night and Fog. The epic tale of one young woman racing to save the man she loves during one of history's darkest hours.

For fans of The Book Thief and Beneath a Scarlet Sky.' 'It's terrifying and incredible to think how much of this story is true' Elizabeth Wein, author of Code Name Verity on Prisoner of Night and Fog Gretchen Muller has three rules for her new life:1.

Blend into the surroundings2. Don't tell anyone who you really are3. Never, ever go back to GermanyGretchen Whitestone has a secret: she used to be part of Adolf Hitler's inner circle.

When she made an enemy of her former friends, she fled Munich for Oxford with her love, Daniel Cohen.

But then a telegram calls Daniel back to Germany, and Gretchen's world turns upside down when he is accused of murder. To save Daniel, Gretchen must return to her homeland and somehow avoid capture by the Nazi elite. As they work to clear Daniel's name, they discover a deadly conspiracy stretching from the slums of Berlin to the Reichstag itself.

Can they dig up the explosive truth and escape in time - or will Hitler find them first?