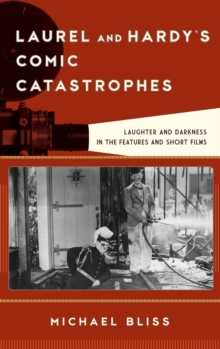 Laurel and Hardy's Comic Catastrophes : Laughter and Darkness in the Features and Short Films

Part of the Film and History series

One of America's most beloved comic duos, Stan Laurel and Oliver Hardy have entertained generations of viewers with their unique, heartwarming brand of slapstick comedy.

The pair's teamwork and friendship set their films apart, softening both pratfalls and hardships, and earning them a cherished place in cinema history.

From their first joint on-screen appearance in 1921's The Lucky Dog through their work at the Hal Roach studios, their comic signature remained unique.

But what made the films of Laurel and Hardy so enduring?In Laurel and Hardy's Comic Catastrophes: Laughter and Darkness in the Features and Short Films, Michael Bliss illustrates why these films continue to make audiences laugh.

Combining an appreciation for the pleasure that these films elicit with a critical examination of what made them work, Bliss first investigates the milieu in which the pair's comedy takes place.

The author then explores Stan and Ollie's friendship and their troubled-and troubling-relationships with women.

The book also features a detailed discussion of Stan Laurel's approach to gag structure, while the remainder of the book focuses on many of the pair's silent and sound films, such as Duck Soup, Pack Up Your Troubles, Chickens Come Home, and The Music Box. By delving into the pair's films-including several neglected short films-in greater detail than any previous work, this volume provides readers with a fundamental understanding of Stan and Ollie's universal appeal.

Featuring an extensive filmography, Laurel and Hardy's Comic Catastrophes will engage a wide audience, from film scholars to fans of humor everywhere.