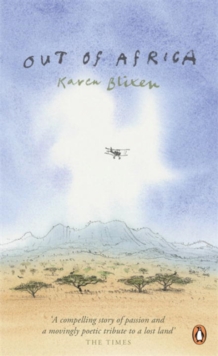 Karen Blixen's Out of Africa is the lyrical and luminous memoir of Kenya that launched a million tourist trails, beautifully repackaged as part of the Penguin Essentials range. 'I had a farm in Africa, at the foot of the Ngong Hills . . . Up in this high air you breathed easily . . . you woke up in the morning and thought: Here I am, where I ought to be.'From the moment Karen Blixen arrived in Kenya in 1914 to manage a coffee plantation, her heart belonged to Africa.

Drawn to the intense colours and ravishing landscapes, Blixen spent her happiest years on the farm, and her experiences and friendships with the people around her are vividly recalled in these memoirs. Out of Africa is the story of a remarkable and unconventional woman, and of a way of life that has vanished for ever. 'With its lyrical and luminous picture of Kenya, it launched a million tourist trails' Guardian'A compelling story of passion and a movingly poetic tribute to a lost land' The TimesA work of sincere power ... a fine lyrical study of life in East Africa - Harold Nicolson, Daily TelegraphKaren Blixen was born in Rungsted, Denmark, in 1885.

After studying art at Copenhagen, Paris and Rome, she married her cousin, Baron Bror Blixen-Finecke, in 1914.

Together they managed a coffee plantation in Kenya until they divorced in 1925.

She continued on the farm until a collapse in the coffee market forced her back to Rungsted in 1931.

Although she had written occasional contributions to Danish periodicals since 1905 (under the nom de plume of Osceola), her real debut took place in 1934 with the publication of Seven Gothic Tales, written in English under the pen name, Isak Dinesen.

Out of Africa (1937) is an autobiographical account of the years she spent in Kenya.

All of her subsequent books were published in both English and Danish, including Winter's Tales (1942) and The Angelic Avengers (1936).

In the 1950s she was mentioned several times as a candidate to receive the Noble Prize in Literature. Baroness Blixen died in Rungsted in 1962. In 1991 her house was opened as The Karen Blixen Museum.