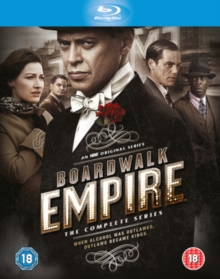 All 56 episodes from every season of the Golden Globe-winning HBO period drama set during the 1920s and early 1930s Prohibition era.

As he progresses in his venture he crosses paths with politicians and mobsters alike but his lavish lifestyle soon leads the federal government to grow suspicious of his activities.

Among the show's executive producers are its creator, 'The Sopranos' writer Terence Winter, and Martin Scorsese, who also directed the pilot.

Season 5 episodes are: 'Golden Days for Boys and Girls', 'The Good Listener', 'What Jesus Said', 'Cuanto', 'King of Norway', 'Devil You Know', 'Friendless Child' and 'Eldorado'.