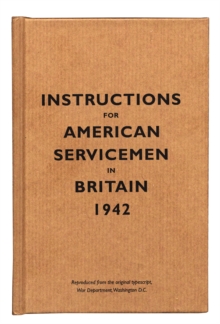 Instructions for American servicemen in Britain 1942

Part of the Instructions for Servicemen series

In 1942 the United States War Department distributed a handbook to American Servicemen advising them on the peculiarities of the 'British, their country, and their ways'.

The guide was intended to lessen the culture shock for those embarking on their first trip to Great Britain, and for the most part, abroad.

The instructions are a wonderful interpretation of the differences between the two allies.

Refreshingly candid quips leap from the pages - in a most un-British fashion: 'the British don't know how to make a good cup of coffee.

You don't know how to make a good cup of tea. It's an even swap' Every page is full of enchantingly nostalgic advice and observations.

Reproduced in a style reminiscent of the era, this is a wonderfully evocative war-time memento.

The reader, from whatever country, will revel in the amusing and terrifically truthful American perception of the British character and country.

Remember: The British are tough.