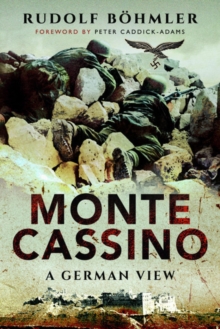 As a German battalion commander Rudolf Bohmler fought in the front line during the fierce battles fought at Monte Cassino.

After the war he wrote this remarkable history, one of the first full-length accounts of this famous and controversial episode in the struggle for Italy.

His pioneering work, which has long been out of print, gives a fascinating insight into the battle as it was perceived at the time and as it was portrayed immediately after the war.

While his fluent narrative offers a strong German view of the fighting, it also covers the Allied side of the story, at every level, in graphic detail.

The climax of his account, his description of the tenacious defence of the town of Cassino and the Monte Cassino abbey by exhausted, outnumbered German troops, has rarely been equalled His book presents a soldiers view of the fighting but it also examines the tactics and planning on both sides.

It is essential reading for everyone who is interested in the Cassino battles and the Italian campaign.