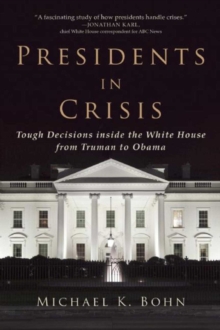 Presidents in crisis : tough decisions inside the White House from Truman to Obama

With a new preface by the author, a former director of the White House Situation Room and seasoned journalist, presidential decision making over the course of twelve modern presidencies.

In Presidents in Crisis, former director of the Situation Room Michael Bohn invites the reader inside the White House during seventeen grave international emergencies handled by the presidents from Truman to Obama.

From North Korea's invasion of South Korea to the revolutions of the Arab Spring and Syria's use of chemical weapons, and from the Cuban missile crisis to George W.

Bush's response to the attacks of September 11, 2001, Bohn walks us step-by-step through each crisis in narratives that convey the drama of unfolding events and the stakes of confrontation when a misstep can mean catastrophe.

He lays out the key players and personalities as well as the moral and political calculations that our leaders have had to make.

In doing so, he provides a fascinating insider's look at modern presidential decision making and the fundamental role in it of human frailty. Skyhorse Publishing, as well as our Arcade imprint, are proud to publish a broad range of books for readers interested in history--books about World War II, the Third Reich, Hitler and his henchmen, the JFK assassination, conspiracies, the American Civil War, the American Revolution, gladiators, Vikings, ancient Rome, medieval times, the old West, and much more.

While not every title we publish becomes a New York Times bestseller or a national bestseller, we are committed to books on subjects that are sometimes overlooked and to authors whose work might not otherwise find a home.