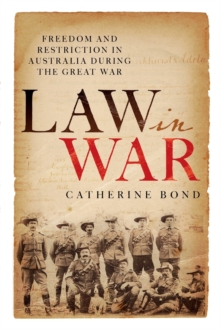 Law in War : Freedom and restriction in Australia during the Great War

A nation often amends its laws during war, not least to regulate life at home.

Yet few historians have considered the impact of law on everyday lives in Australia during the Great War. In this original book, lawyer and historian Catherine Bond breathes life into the laws that were central to the way that people's daily lives were managed in Australia 1914-18.

Riveting and at times shocking, it argues that in First World War Australia, law perpetuated a form of tyranny in the name of victory in war. Bond finds that law was used as a tool against many Australians to discriminate, oppress, censor and deprive them of property, liberty and basic human rights.

This legal regime created a deep injustice that, for the most part, has remained undocumented and unacknowledged. The book examines and documents individual experiences under the law, so we meet:The men who wrote the lawsA police officer who enforced the lawTwo men interned under the lawTwo female protesters who were gaoled under the lawA man imprisoned multiple times then deportedThree men who were discriminated against by the lawTwo men who benefitted from the lawMany infamous laws were used during this period, including the War Precautions Act (and its myriad regulations) and the Unlawful Associations Act.

Engaging and informative, this book holds those who wrote the laws to account, exposing the sheer breadth and impact of this wartime legal regime, some of which is still in force to this day.